Should You Try Chrome Tab Groups?

Chrome Tab Groups is a built-in feature from Google that lets you categorize your open tabs into visually distinct groups. Keep reading for a breakdown of what we like and what we don’t like about Chrome Tab Groups, and whether it’s worth putting into action.

If you tend to have lots of tabs open, we recommend Workona instead of Chrome Tab Groups. It's a more powerful tab manager that's just as easy to use.

Can anyone use Chrome Tab Groups?

Yep! Previously, Chrome Tab Groups had to be enabled manually (when it was first released as an experimental feature in 2020). But now the Chrome Tab Groups feature is available for the latest version of Google Chrome, so you’re free to use it on both desktop and mobile (Android only).

How do you use Chrome Tab Groups?

Chrome Tab Groups is easy to use. In an existing window with open tabs (preferably a sizable number), you can start grouping your tabs. Right-click on a tab and select Add to New Group from the menu.

A colored circle will show next to the tab, and when you click either the tab or the circle, the tab group menu will appear. Here you can name the group, change the color scheme, add a new tab into the group, disband all tabs in the group, or close all tabs that are in the group.

What stands out when using Chrome Tab Groups is the simplicity of it. The scope of the product is limited, so it’s easy to get the hang of it and start organizing your tabs within minutes.

What users like
“I’ve used Tab Groups for a few weeks now and really like them because you can find things much more easily and don't need to create as many bookmark folders.”
- McThakken

Chrome Tab Groups work best when you have limited tabs open (around 10 or so). But what if you have a large number of tabs open? With multiple groups crammed into the same window, it quickly becomes confusing. If that's the case for you, Workona is a better option.

Workona groups your tabs into workspaces (think of them as separate folders for each project). If your work is complex and involves multiple projects per day, having your tabs separated into workspaces is the cleanest way to organize them.

What users don't like
“Chrome Tab Groups seems oriented on people who don't have 20+ tabs in a single window. I'm already running into problems because any tabs that don't fit into the top bar are silently shunted off to the right side.”
– @yesthatsatwitr

How to use Chrome Tab Groups on mobile

Chrome Tab Groups is not currently available on iPad or iPhone.

Just like on the desktop version of Chrome, Android has Chrome Tab Groups built into the mobile Chrome browser (though you can uninstall if you prefer not to use it). 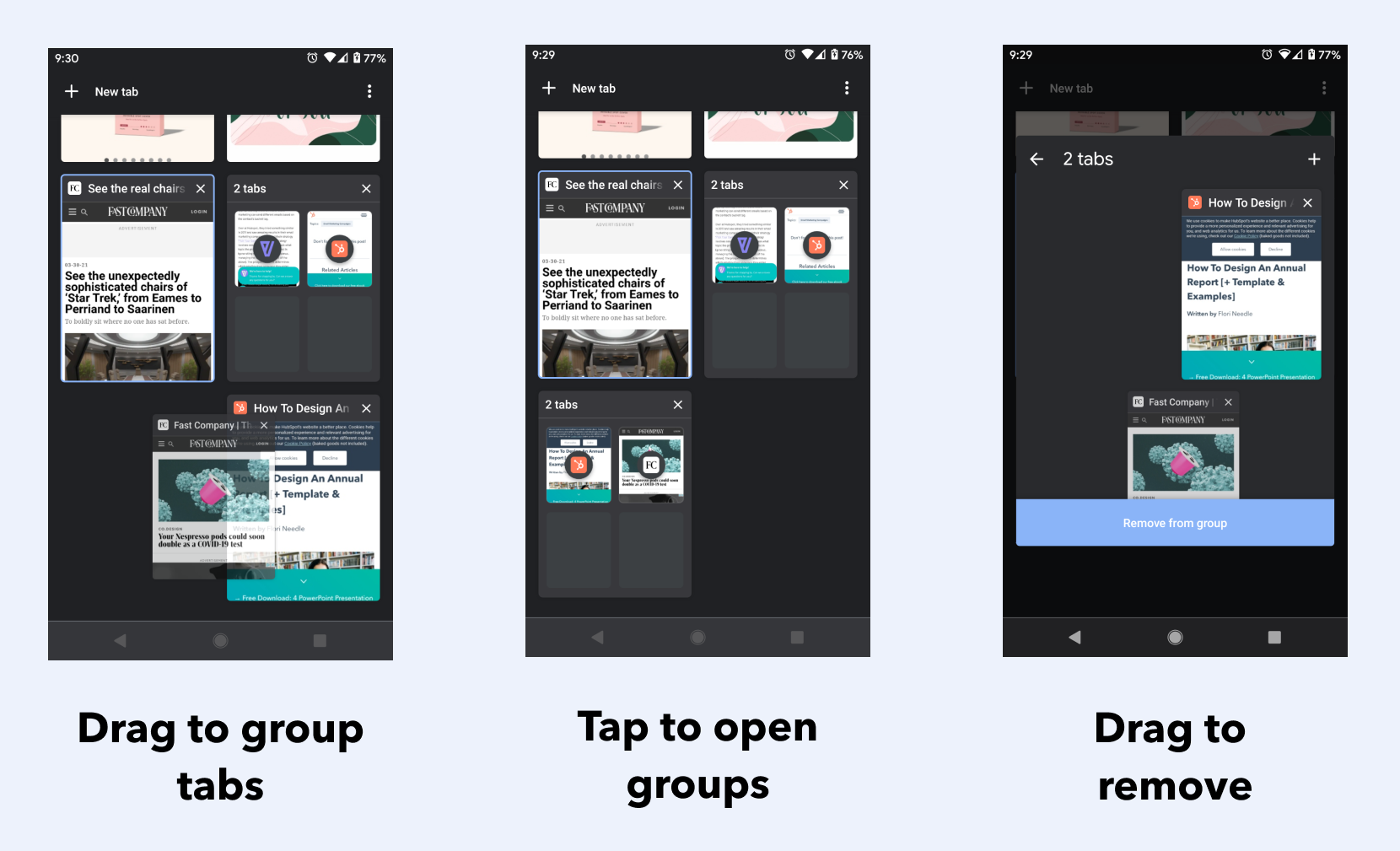 If you tend to do research on your mobile device, Tab Groups can help you remember each train of thought. But if your mobile browsing is more casual, the feature might be more hassle than it's worth. For example, Chrome Tab Groups doesn't allow you to easily open a link in a new tab — you only get the option to open in a new tab group. Ultimately, Chrome Tab Groups on mobile is worth a try if you're desperate to keep your tabs organized.

How do you disable Chrome Tab Groups on Android?

If you don’t want to have Tab Groups enabled on your Android device, follow these steps:

If you don't see the old layout after restart, try reloading Chrome again.

How do I look at Tab Groups in Chrome history?

The tab groups won’t appear in Chrome history. However, the tabs themselves will appear, and if you opened a Tab Group in its own window, you'll see the Tab Group you created in history, which is indicated by the number of tabs rather than the tab group names.

Do I need a Chrome extension for Tab Groups?

Chrome Tab Groups is built into the Chrome browser, so there’s no need to install an extension or add-on.

Chromebook recently announced that they will support Tab Groups within the popular reading lists feature.